Christmas around the World 2017

The Geelong Chorale in association with the Geelong Handbell Choir performed ‘Christmas Around the World’ on Saturday December 2 2017 at 5pm at All Saints Anglican Church, Newtown. 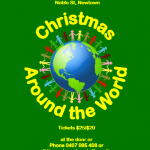 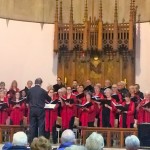 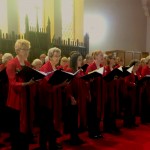 An Unconventional Christmas from the Chorale

Christmas Around The World, sung by The Geelong Chorale  conducted by Allister Cox. All Saints Anglican Church, Newtown December 2, 2017.

The Geelong Chorale’s annual Christmas concert has become a tradition in itself, going back to the time the group was called ‘The GAMA Singers’ presenting carols and wassail songs in the Geelong Art Gallery. That took place for most of the second half of the 20th Century.

But that was then. This is now, and our Gallery, now re-badged to ‘Geelong Gallery’ has no room for singers as it pursues other agendas. This year it was crowded with Archibald visitors.
So for most of this century, our Chorale has chosen to present its annual Christmas song feasts in different venues, usually chosen for the quality of their acoustics.
So it was that we gathered in Newtown’s All Saints church – itself newly refurbished and furnished – to experience another episode of a Geelong convention.
But that wasn’t what the Chorale had in mind. This time, they presented a Christmas concert laced with surprise and refinement, with songs chosen from a much wider spectrum. The world, no less. Though, on second thoughts, it’s probably safer to say the Christian world.
The concert started unconventionally, with the Chorale entering with its female members chorusing very good impressions of kookaburras which melded into Matthew Orlovich’s Australian carol ‘If Christ Had Been Born In Another Time’ – all delivered from the back of the church, behind the audience. This resounding piece, echoing around the venue’s high rafters, set the standard for what was a glorious mix of unusual with conventional material.
So we heard a delightfully sweet  all-female version of the Dutch carol ‘King Jesus Hath A Garden’ delivered by the Chorale’s women conducted by Ann Pilgrim, and later the men sang a West Indian calypso carol ‘De Virgin Mary Had A Baby Boy’ with tall, slim, Anglo baritone, William Humphries, more than doing justice to the Harry Belafonte lead part.

We heard the full Chorale delight with the traditional French piece ‘Il est ne, le devin enfant’,  accompanied by Frank De Rosso on the church’s organ, a moving Czech song ‘Rocking’ – and were invited to join in with what we learned was a Finnish tune to a Bohemian story – Good King Wenceslas.  Kristine Mellens, as ever, contributed subtle accompaniment
on the piano.
The songs were divided into brackets with subheadings ‘The Prophesy’ ‘The Birth’ ‘The Shepherds’ etc with now-customary excellent introductions and explanations from the Chorale’s director/conductor Allister Cox.
Before the interval – during which we were served with sparkling wine and Christmas cake, no less –  came another tradition, when the Chorale’s familiar guests, the Geelong Handbell Choir,  presented six short pieces that reflected the concert’s theme in the most charming way.
So after a brilliant chiming of the  Fanfare to ‘O Come All Ye Faithful’, we heard a French, an Australian and a Canadian carol delivered by the bells which finished with a harmonic version of Irving Berlin’s ‘White Christmas’.  All greatly appreciated and applauded.
The concert’s second half started with a New Zealand jewel and strung along with Canadian, Spanish, and Ukranian seasonal pieces, set with the beautiful ‘Coventry Carol’ lament, the musical fun of a Czech ‘Zither Carol’ (with the male chorus singing ‘zum zing zing’) and a beautifully tonal ‘Silent Night’  – before finishing in traditional style with ‘O Come All Ye Faithful’ followed by ‘We Wish You A Merry Christmas’.

In all, this was a delightful, unconventional way to continue a fine tradition – and even the weather contributed a northern-hemisphere cold, wet -and very un-Australian – afternoon.

Concerts
Last Night of the Proms
Singing the Classics 2018