Monthly archives for May, 2019

The Geelong Chorale’s first concert for 2019 was the opening concert of Music at the Basilica’s 11th Annual Windfire Music Festival. It was a spectacular program of music for double choir, brass ensemble and organ, featuring music from the Renaissance to the present day.

This, the opening concert of Geelong’s annual Windfire Music Festival, proved perfect for the occasion. It was a memorable concert that took full advantage of the Basilica’s superb acoustics.

My initial impression was of a warm, welcoming atmosphere with hanging glass lanterns and glowing radiators.
A welcoming address from from Fr James Clarke led to a stirring, resounding intro, Entrata Festiva, a modern (20th Century) piece featuring Daniel Ballinger and Sarah Hepworth’s trumpets, Melissa Shirley’s horn, Stewart Armitage’s trombone and the Basilica’s thundering, mighty organ played by Frank De Rosso.
Then the Chorale members entered, only to disappear again as they took up positions in the acoustic sweet-spot in the space behind the venue’s original altar.

The blend of their voices, without accompaniment was perfect in its resonance as they sang Guerrero’s Cantite tunba in Sion.
That musical contrast between first and second items assured us in the audience that we were about to experience a programme of thoughtful excellence.

The choir then moved into sight at the front of the original altar, resplendent in their neat black and red, and Allister Cox introduced us to three works from the 16th century. First, Jacobus Gallus, whose Pater Noster used choir and brass to excellent, full and harmonious effect, followed by an a capella rendition of Giovanni da Palestrina’s  calm and beautiful Sicut Cervus.

This was followed by Scarlatti’s glorious Exultate Deo with its joyful praise to God ringing throughout the rafters.

The choir changed position once again to risers on the right of the first row of pews, allowing the brass to move closer on the left.

Together they presented Gabrielli’s Canzona ´a 4 with sympathetic style.

Then followed a sharing of brass and voices to present the music of Hassler’s Missa Octo Voci, sung in Latin and accepted with warm applause.

At one point the director’s microphone failed mid-introduction, but Allister simply raised his voice to be clearly heard, demonstrating the excellence of the venue’s acoustics.

After a short interval the concert took a more modern, contrasting turn with Christopher Willcock’s challenging Easter Moon. The composition’s strident and sometimes pensive tones were handled with accomplished ease by choir and musicians.

Then came an unusual inclusion, with three different versions of Ave Maria, from Bruckner, Biebl and Laurisdsen. Allister explained that he had chosen them as appropriate because of the venue, (St Mary’s Basilica) as well as referencing the forthcoming Mother’s Day. The subtle differences and variations of tune and style added a deal of interest as the pieces were sung consecutively.

Then followed a triumphal and stirring Grand Choeur Dialogue with Frank De Rosso at the organ and the Choir in full voice, thundering down from the venue’s choir loft.

The concert finished on a different, but equally stirring note with the brass leading into voices to present Pachelbel’s rousing Nun Danket all Gott.

Taken together, this concert set the Windfire Festival to a stirring start while demonstrating our city’s exceptional quality of musicianship and choral abilities. 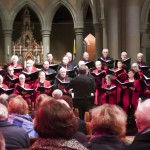 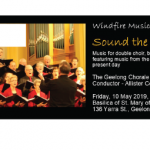