Singing for all. Come along to our Singing the Classics days.

The Geelong Chorale are delighted to announce our programme for 2023 and we hope to see you at our concerts.

The Very Best Time of Year

This year, our Christmas concert featured the carols of John Rutter. Born in 1945, Rutter is considered to be the most celebrated and popular composer of Christmas music alive today. His music displays influences of the English and French choral traditions of the 20th century as well as light music and American classic songwriting. A review in the London Evening Standard said, “For the infectiousness of his melodic invention and consummate craftsmanship, Rutter has few peers”. The Geelong Chorale performed a selection of his best known original compositions along with some of his masterful arrangements. There were also other popular carols, some with audience participation.

The Very Best Time Of The Year presented by The Geelong Chorale conductor Allister Cox, December 10, All Saints’ Church, Newtown.
Each year since the mid 20th Century, the Geelong Chorale has staged a Christmas concert in a suitably elegant and acoustically pleasing local venue. For many years this was the Geelong Gallery but for the past decade or so, the annual event has been held in Newtown’s All Saints Church. Every concert has been different and eclectic but with common themes. You won’t hear songs about Santa, reindeer or jingling bells at a Geelong Chorale Christmas concert. You’re much more likely to be taken back to celebrations from Yule times of yore. You’ll also get a glimpse of how the season is celebrated internationally.
This year, the Chorale’s musical director, Allister Cox, chose to feature the carols of a living composer, John Rutter. An Englishman born in 1945, Rutter is considered to be the most celebrated and popular composer of Christmas music alive today. He’s particularly popular in America. His music carries influences of English and French choral traditions as well as from America’s light music songbooks.
The Chorale dedicated the entire first half of this concert to his works, then, following a short interval, presented a mix of Carols old and new, with an invitation for the audience to join them.
The concert’s overall title The Very Best Time Of The Year was lifted from the first song, a sweet, lyrical opening introduction to Rutter’s composition skills. The 30+ Chorale voices blended lyrically to present it with a high Geelong polish that continued through the entire concert. The second piece, Shepherds’ Pipe Carol, was a jaunty air featuring the Chorale’s tenor voices, while the next, What Sweeter Music, featured the soprano section who were, indeed, sweet. Then followed the first of five songs that Rutter had not written, but arranged for the group that he founded, the world renowned Cambridge Singers.
The French Carol Born To Earth, the Divine Christ Child was followed by a Cornish traditional piece Sans Day Carol – instantly recognisable as the more familiar The Holly And The Ivy.
A Little Child on the Earth Has Been Born was set to a traditional Flemish melody and Quem Pastores Laudavere a 14th Century German carol sung in Latin.
These were themselves arranged around John Rutter’s own Nativity Carol and neatly topped off with his bright and cheerful Star Carol.
The concert’s second half Carols Old And New alternated well-known Christmas songs – where the audience was invited to sing along – with some well-chosen new works.
It began with the standard O Come All Ye Faithful, nicely delivered by the Chorale, though we audience were a little bashful. The new work that followed, O Magnum mysterium was a solemn 1994 piece written in Latin by Morten Lauridsen. It was followed by the traditional The First Nowell, again neatly delivered by the Chorale, with tentative audience participation. The Angels and the Shepherds was next, a traditional Bohemian favourite that was much loved by Chorale tenor Milena Idris when she was a child, according to conductor Allister Cox’s introduction. Then, before the next traditional piece, Good King Wenceslas, he told of the song’s controversial beginnings, of how it began as a traditional European Spring celebration song that was appropriated and reworked to become a Christmas staple much to the annoyance of purists. This brought an immediate audience response as we found our voices to match the Chorale and deliver a rousing version.
Then followed a lyrical German piece Susanni (Lullaby) then Silent Night, Holy Night, a stirring Hark The Herald Angels Singbefore the afternoon’s finale, a modern Australian song by Matthew Orlovich, If Christ had been born in another time which posed the questions ‘If Mary and Joseph had travelled through the Australian outback, would there have been no room in the pub?’ ‘Would they have been turned away while drovers and stockmen jostled the bar toasting the end of the day?’ And ‘Would the Wise Men have brought gifts of perfume and oil from the eucalypt tree or gold from a river’s bed?’
The writer called for this song to be opened and closed with the sound of Kookaburras, a challenge which the Chorale joyfully accepted to bring their 2023 Christmas concert to a unique – and delightful – conclusion.

The Very Best Time of Year

LOCATION
The Basilica of St Mary of the Angels
136 Yarra Street, Geelong Victoria 3220 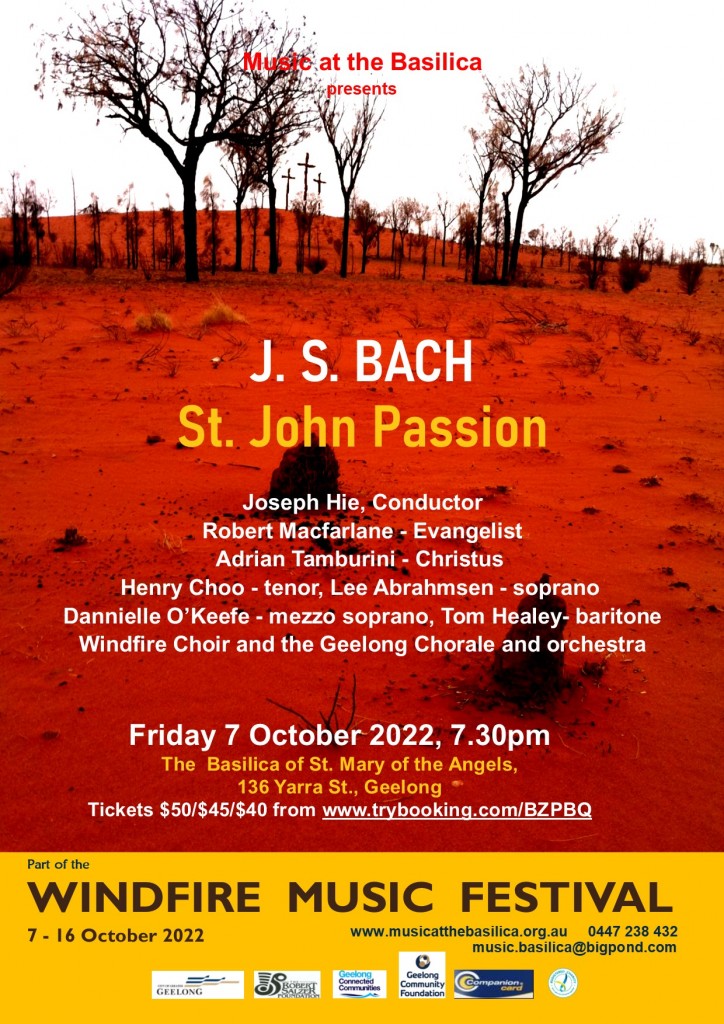 Around the World in 80 Minutes

Having been delayed in making this overseas journey for the past two years, we are were delighted to finally present “Around the World in Eighty Minutes”
Although restrictions have generally eased, overseas travel still remains a challenge.
So come on an overseas journey with us, no need to check in or stand at the luggage carousel, as we take you on an epic journey via the world’s treasury of folk songs. 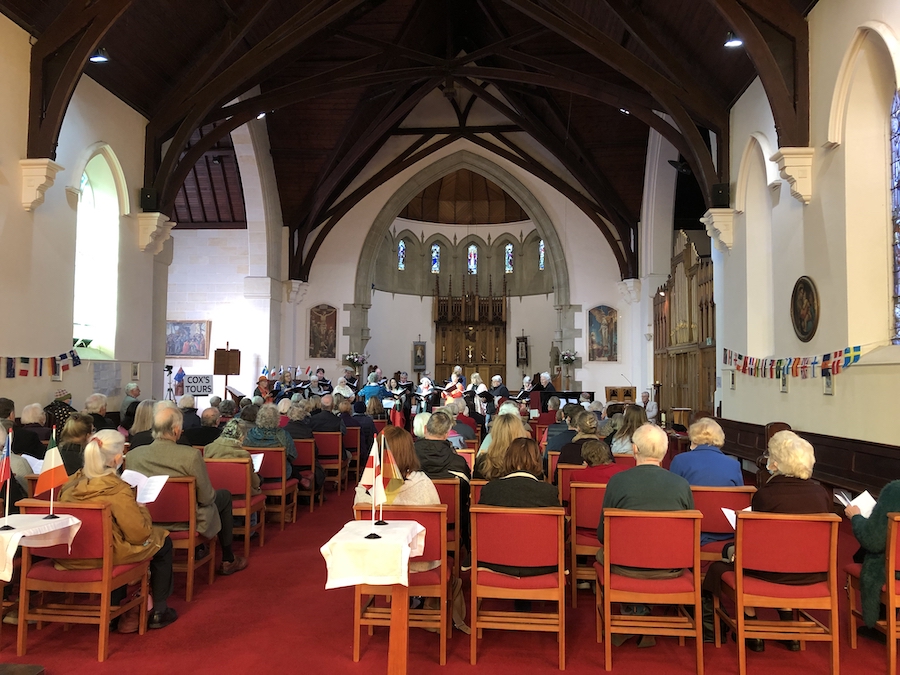 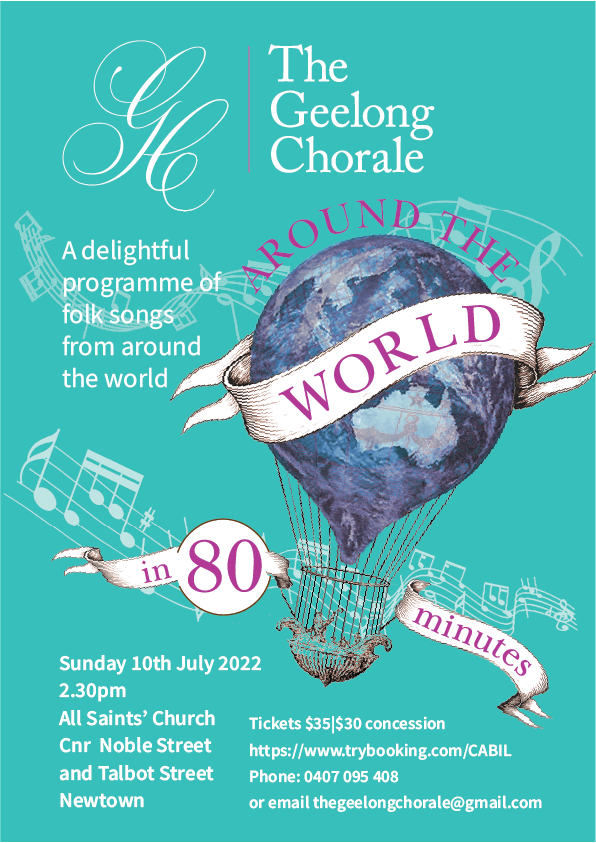 Around the World in 80 Minutes

Vaughan Williams – A Life in Music

2022 marks the 150th anniversary of the birth of one of England’s finest composers. In a long and productive life, hardly a music genre has been left untouched or failed to be enriched by Vaughan Williams’s work. We will mark this significant milestone with a selection of his finest choral music.

The Geelong Chorale are pleased to announce that we are in rehearsal again and will present a feast of singing in three major concerts this year.

Our first concert will celebrate the 150th anniversary of the birth of Ralph Vaughan Williams, the quintessential English composer of the 20th century. For this concert we will be joined by four soloists to present a selection of some of his finest choral music: grand anthems, partsongs, folksongs, and movements from the Mass in G minor. Sunday 15th May at 2:30pm in All Saints Church, Noble Street.

Having been delayed in making any overseas journey for the past two years, we are delighted that we can finally present “Around the World in Eighty Minutes”: a veritable whistle-stop tour of many countries via the world’s treasury of folksongs. Sunday 10th July at 2:30pm in All Saints Church, Noble Street.

In October we will combine with Music at the Basilica’s Windfire Choir to present the monumental ‘St John Passion” by J.S. Bach. This moving work has rarely, if ever, been performed in Geelong. First-class soloists and orchestra will accompany the combined choir, all conducted by Joseph Hie.

The Geelong Chorale’s Christmas concert this year featured works by two great English composers: Fantasia on Christmas Carols by Ralph Vaughan Williams and John Rutter’s supremely engaging Magnificat. There was also be a chance to hear two rarely performed Christmas chorales from Vaughan Williams’ cantata, Hodie. The Geelong Chorale was once again be joined by The Geelong Handbell Choir, directed by Gwyn Gillard. Soloists for the concert are Fiona Squires, soprano, and Rodney Dearing, baritone, with piano accompaniment by Kristine Mellens. 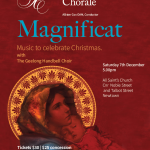 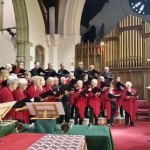 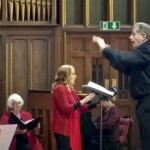 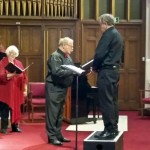 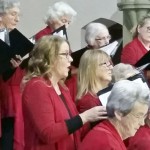 Singing the Classics – John Rutter – Mass of the Children

A reminder: next Sunday,6 October, in the For the Joy of Singing the Classics program, we will sing through Rutter’s Mass of the Children.

This was first performed in 2003, in Carnegie Hall, New York, conducted by John Rutter. It is written for adult and children’s choirs with soloists, with the Mass texts interspersed with poetry of Thomas Ken (1637-1711) (Awake, my soul, and with the sun…)”, William Blake (1757-1827) (“Little Lamb, who made thee?”) and other sources.

If you want to participate, please contact Anne at: pandapilgrim@gmail.com